Now under construction, Metro’s Regional Connector is one of the most pivotal transportation projects now underway in Los Angeles County. Once complete, it will bring a trio of new underground transit stations to Downtown LA. But it’s more than a few new stops.

The 1.9 miles of new track laid for the project will allow light rail trains to travel between Union Station and the busy 7th Street/Metro Center Station in Downtown’s Financial District. Right now, that’s a journey that only Metro’s heavy rail subway lines can make.

Bridging that gap will allow Metro to merge the hook-shaped L (formerly Gold) Line with the A (formerly Blue) and E (formerly Expo) lines, creating two serpent-like train lines where once there were three.

That will change the way a lot of Metro riders take the train. It’s going to mean less fuss for a chunk of cross-city (or inter-city) trips, and it’ll be more efficient too.

Metro expects that passengers taking trips that would require multiple transfers today can shave about 20 minutes off of their travel times once the Regional Connector opens, says Metro Communications Manager Rick Jager.

The project isn’t as flashy as Metro’s D Line subway to the Westside, or a rail connection to LAX, but it could make a big impact for riders. Here are some important things to know about the Regional Connector, from when it will be finished to how it will fit into Metro’s rail network.

What is the Regional Connector?

The project is a short light rail line linking Union Station and the 7th Street/Metro Center Station. It will travel mostly underground, stopping at three new subway stations in the Downtown area.

Those stops will be accessible to Downtown’s Civic Center, Historic Core, and the Little Tokyo and Arts District neighborhoods. They will also supplement existing Downtown stations at Pershing Square and Grand Park that serve the B (formerly Red) and D (formerly Purple) lines (Metro’s light rail trains can’t use these stations because they are built for larger, heavy rail trains).

When will it open?

Construction on the project started in 2014 and is now expected to wrap up in mid-to-late 2022. That’s a later opening date than Metro originally planned, and a recent update on construction notes that the agency is working to avoid further delays.

Where will the new stations be located?

The first, called the Grand Av Arts/Bunker Hill Station, will actually be located at the intersection of Second and Hope streets, a block west of Grand Avenue. Right behind the Broad Museum, it will also be easily accessible to the Los Angeles Music Center, Grand Park, MOCA, the Westin Bonaventure Hotel, and the U.S. Bank Tower.

The second stop is called the Historic Broadway station and will be located at Second and Broadway. It’s a few blocks north of most of Broadway’s historic theaters, but will provide a new access point to the cluster of government buildings and offices around City Hall. It’s also just a block from Grand Central Market and the Bradbury Building.

The third and final stop, called the Little Tokyo/Arts District Station, will replace an existing above-ground train platform with the same name. Like the other two new stations, this one will be underground. It will be located at the intersection of First Street and Central Avenue, right across from the Japanese Village Plaza and the Japanese American National Museum. As the name implies, it’s convenient to the Arts District as well as Little Tokyo. The cluster of popular shops, restaurants, and breweries at Third Street and Traction Avenue is just a few blocks away.

What does this mean for existing train lines?

Right now, there is an inconvenient “gap” in Downtown’s rail service, says Jager. For example, taking off from the L Line’s Mariachi Plaza Station to the Exposition Park/USC Station along the E Line entails switching trains at Union Station (and walking the equivalent of at least a city block to do so), taking the B Line for a few stops, then switching to the E Line at 7th Street/Metro Center.

With the Regional Connector, the same trip could be a one-seat ride. Once tracks are laid between Union Station and 7th Street/Metro Center, the L Line can be divided up into two parts and tacked onto the A and E lines.

Metro planners have long proposed that the L Line’s southeastern leg be affixed to the E Line, creating a continuous train route between Santa Monica and East Los Angeles. The remainder of the L Line would then be linked to the A Line, making possible a one-seat ride between Azusa and Long Beach.

However, at a committee meeting in January, senior executive officer Conan Cheung told members of the agency’s Board of Directors that Metro is also studying the possibility of connecting the A Line to the L Line’s lower segment, creating a Long Beach-to-East Los Angeles rail line. The northern part of the L Line would then link up to the E Line, allowing for continuous trips between Azusa and Santa Monica.

A third possibility would be alternating train service between all four final destinations, though Cheung suggested that option could prove confusing and impractical. 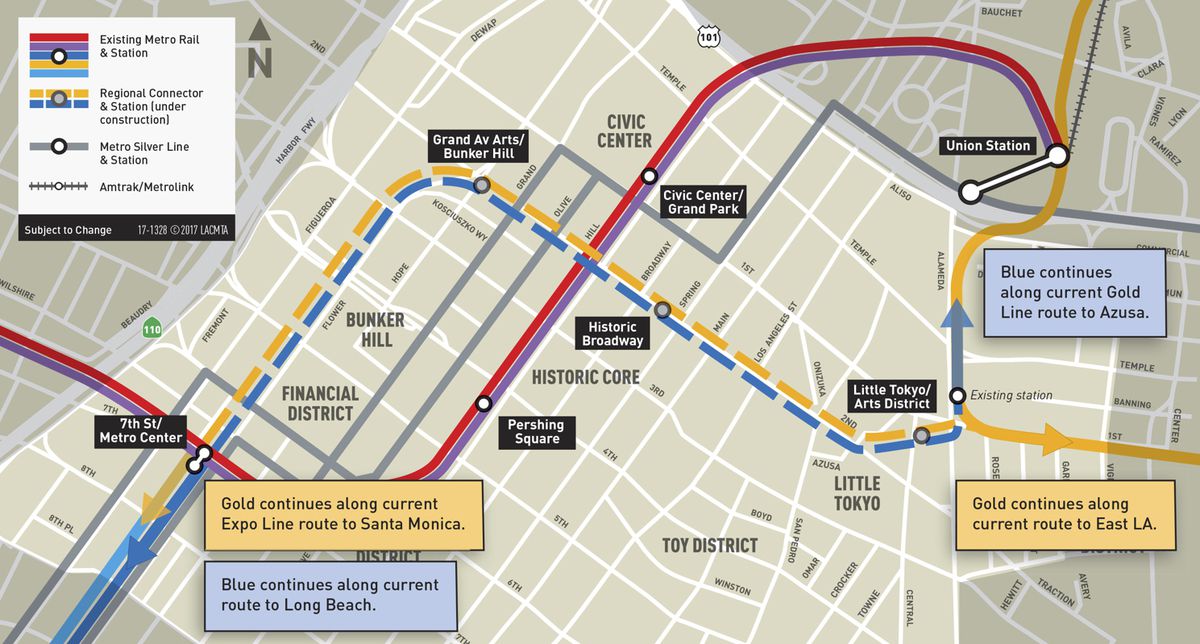 How will this affect riders?

For most riders, the project will open up new and more convenient travel options. Those who currently use the A, E, and L lines to get Downtown will be able to access more neighborhoods and stops than they have access to today. Depending on which routes Metro settles on, trips between distant parts of the county will become seamless.

Once extensions of the current L Line open, even more options will open up. Riders could conceivably take a single train from Long Beach (or Santa Monica) to the County Fairplex in Pomona.

Those who now use the L Line to get from, say, Boyle Heights to Pasadena, on the other hand, will have to get off and transfer when making that trip in the future. Today, it’s a one-seat ride.

What happens to the old Little Tokyo/Arts District Station?

Here comes the bad news for riders in East LA, Boyle Heights, Little Tokyo, and the Arts District. Connecting the new Little Tokyo/Arts District Station to Union Station will require permanent closure of the existing stop, and for nearly two years trains will stop running between Union Station and the Pico/Aliso Station east of the LA River.

Starting at the end of this year, a shuttle bus will replace the train on this segment of the line for at least 22 months. Metro projects engineering executive officer Gary Baker said in January that the bus would likely add between seven and 10 minutes to the travel times of riders who use the train in this area.