Beyond the Headline Numbers: What the Slowdown in GDP Means for Commercial Real Estate

In the wake of the most recent “report card” on the state of the U.S. economy, investors are attempting to better understand the implications for commercial real estate performance. Economic growth touches every property type, from trade disputes raising costs for investors looking to fix up properties to consumption growth pushing demand for logistics warehouses.

As a preliminary matter, the U.S. gross domestic product, or GDP, decelerated in the second quarter of 2019, growing at an estimated annualized rate of 2.1%. While this is much slower than the 3.1% growth the U.S. saw in the first quarter, it did beat most analyst expectations.

Growth was largely driven by consumer spending, which accounts for 68% of GDP and rebounded in the spring months after having one of its weakest quarters since the recession. But not all sectors were so rosy. Fixed investment, both residential and nonresidential, were lower in the second quarter, and exports of both goods and services fell by more than 5% while imports rose.

Trends are more important than the findings of a single report, and last week’s GDP update does serve as a confirmation of many economic tendencies that have appeared in the past year. Consumer spending growth has been running above the average for the past decade or so and government spending has been accelerating. However, year-over-year fixed investment growth is just one-quarter of what it was in the second quarter of 2018 and is growing slower than consumption for the first time since 2016. Export growth, meanwhile, has decelerated and was negative in the latest report. 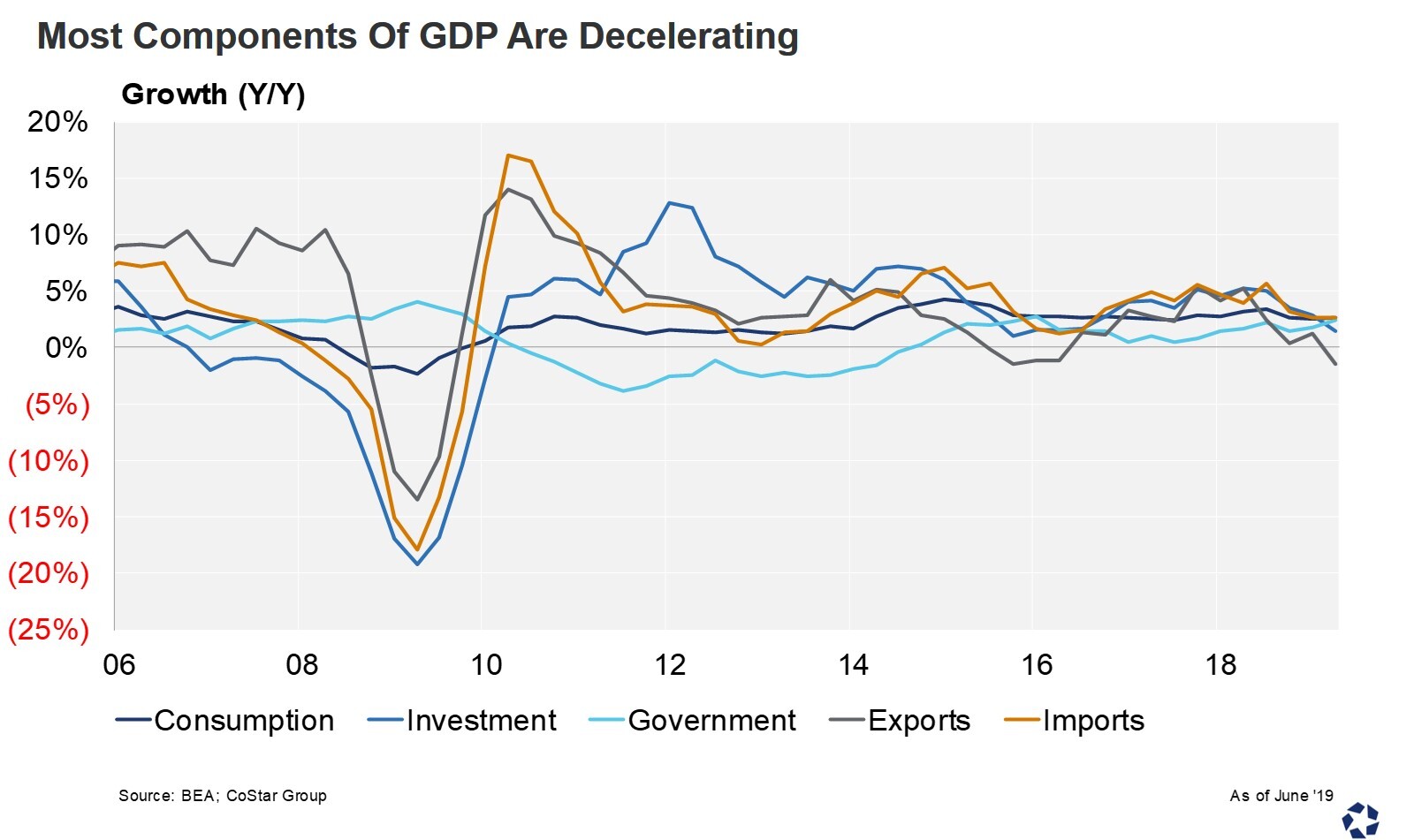 Components of GDP growth affect the commercial real estate sector in many different ways. Here are just a few examples of where consumption, fixed investment, and trade matter for commercial property owners and investors.

Consumer spending accounts for the majority of GDP, a share that has grown significantly since the 1960s. Consumption has maintained steady, consistent growth over the past few years, driven by a recovering labor market and more recently, better wage gains.

Increased consumer spending directly impacts all property types through different channels, whether it’s demand for physical retail space or increased capacity in manufacturing. A relatively new channel for consumption to affect real estate in the past decade or so has been through e-commerce, with logistics properties being one of the biggest beneficiaries. 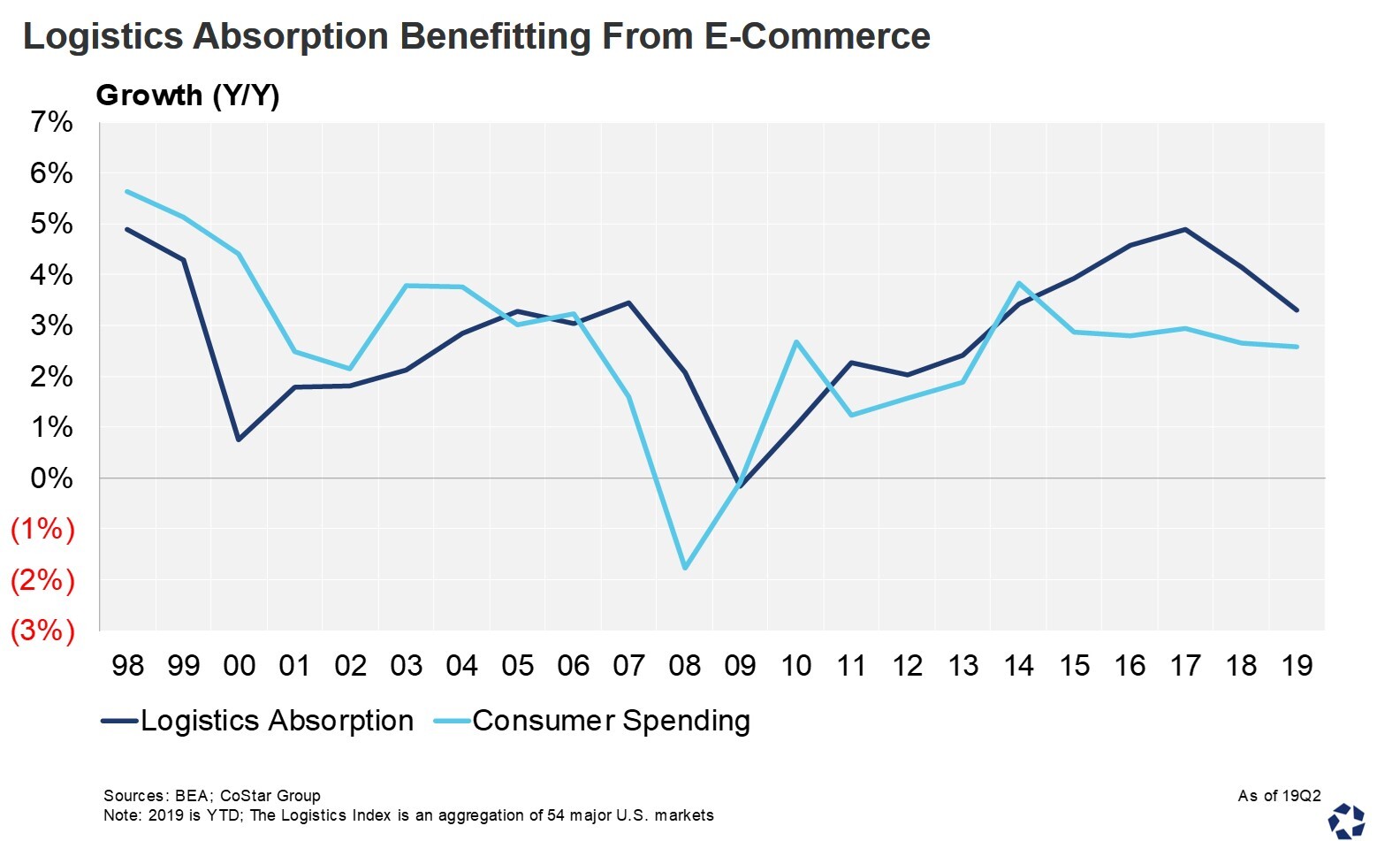 Demand for logistics space is pushed up by e-commerce sales growth, which has grown at an average rate of 15% per year during this extended period of expansion. The amount of logistics space has increased by 24% in that time, and sales volume is 175% higher than its pre-recession peak.

As consumers continue to shift to “clicks” and away from “bricks,” demand for logistics space will move with e-commerce.

Nonresidential fixed investment, better known as business spending, has been decelerating since mid-2018, with year-over-year investment in structures contracting for the first time since 2016.

Some of this slowdown is undoubtedly due to trade concerns. Across the country, businesses are reporting delays or reduction in spending because of uncertainty over the impact of recent trade policies, with nine of the 12 Federal Reserve districts reporting trade uncertainty as a topic of concern in the July summary of economic activity prepared by the Federal Reserve before a Federal Open Market Committee meeting known as the Beige Book.

Within the nonresidential fixed investment category, structures and equipment spending slowed as businesses were hesitant about the future, but intellectual property remained strong. In the short-term, this is good news for office demand, as tech is a key driver of office-using employment.

However, continuing weakness in investment will ultimately cut into company profits, slowing down employment growth, while uncertainty will probably make companies less willing to hire if they are unsure about future economic conditions. 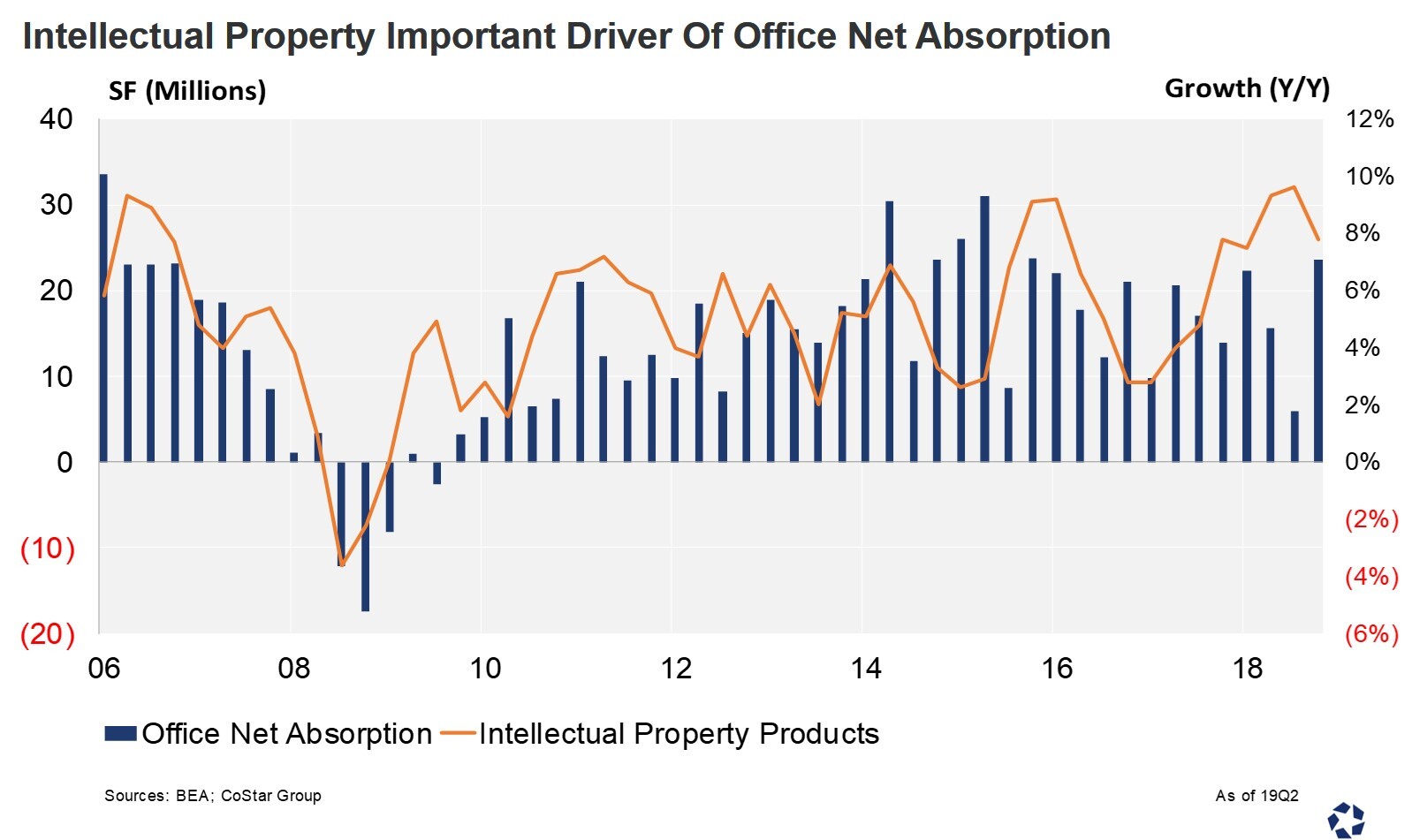 One of the biggest economic stories recently has been the escalating trade dispute between the U.S. and China. Export growth had been decelerating since early 2018 as the U.S. trade deficit continues to widen. Meanwhile, the U.S has been imposing tariffs on hundreds of billions of dollars of goods, complicating the economic outlook.

In the short term, manufacturers and other companies exposed to trade are feeling the pressure as the cost of raw materials increases. There is a concern that if the trade war persists and exports continue to decline, industrial demand could be impacted, but it has yet to materialize.

Given the current uncertainty, some companies and investors have adopted a wait-and-see approach, unwilling to take on risk if the near and medium-term economic outlook remains opaque.

For investors in apartments who plan to fix up the buildings to be able to raise rents, this uncertainty comes at a time where the investing environment is already increasingly difficult to operate, as illustrated in the spread in the average price per unit between higher-quality 4 and 5 star and average-quality 3 star apartments, which has declined by 16 percentage points since the start of 2018. 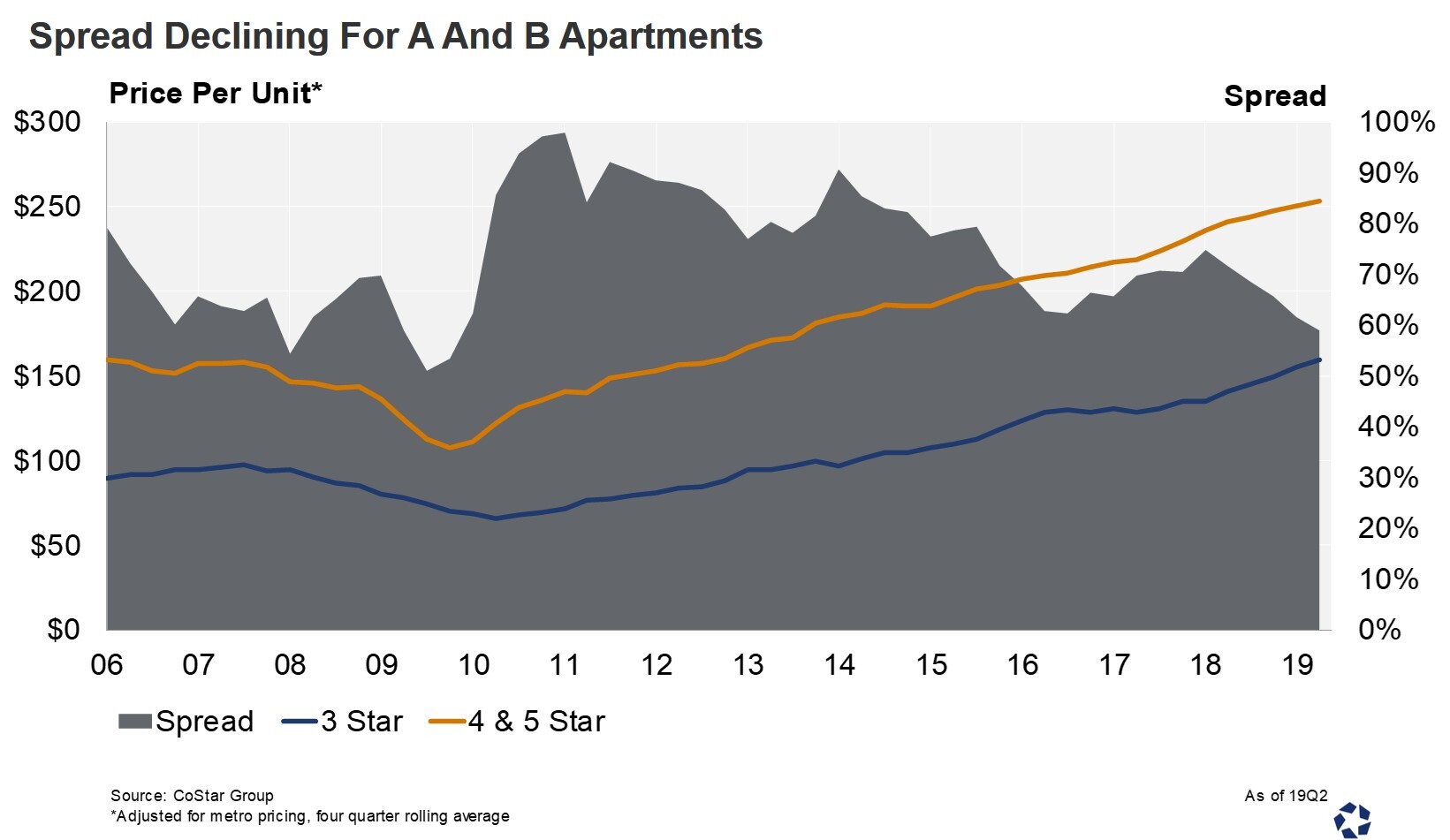 With cap rates already compressed to cyclical lows, these value-add investors are looking to boost rents, but tariffs are making that more difficult by making household items such as stainless steel sinks and washing machines more expensive. These and other items are typically purchased and installed by these value-add investors as part of a property upgrade are included in the tariffs imposed on China. The cost of finding an alternative source, or paying a higher price, puts additional cost pressure on investors.

Now in our longest recovery in U.S. history, economic fundamentals look mostly promising for commercial real estate. Uncertainty has taken hold in some sectors, delaying investment in the short term and dampening growth in the medium term.