Investment strategies have changed a lot in the historic 10-year economic expansion that's still ongoing. During the span, major investors have rung up more than $500 billion in either merger and acquisition purchases, or bulk portfolio buys of $1 billion or more, according to CoStar data.

As we are now seeing, that has left many of them with hefty portfolios of what they are calling legacy assets, or properties they acquired in the first few years after 2009. Notably too, many of the acquired assets were legacy assets of their own for the sellers, who bought in the years before the last downturn began in 2007.

Now those old assets are going on the block. Private equity real estate investor Thomas Barrack Jr., founder of Colony Capital and its sister REIT, Colony Credit Real Estate, is the latest, and so far, the most notable executive to detail the strategy.

The world has changed. The period of cheap money buying properties that can quickly appreciate in value is gone. Barrack said he doesn't like the physical and financial obsolescence of long-held assets.

Barrack is ditching all of Colony’s legacy holdings to go full-fledged into so-called digital real estate, including such assets and properties as data centers, cell towers and fiber optic networks. He hopes to be fully divested by the end of 2021.

Colony is on pace to exceed $500 million of net proceeds from the sale of noncore assets this year and has begun the sale process on its industrial assets. As of June 30, Colony owned a light industrial portfolio of 446 buildings totaling 55.7 million rentable square feet across 26 major U.S. markets that was 92% leased.

"We anticipate a significant reduction in our existing operating costs, but to a level that will be more than sufficient to gain dominance in a highly attractive sector," he said.

Other REITs have reported that legacy properties make up anywhere from 15% to 25% of their assets.

CoStar data shows how portfolio purchases have changed over the past 10 years. The bulk purchase of specialty assets including data centers such as those Colony is now acquiring totaled just $4 billion from 2010 through 2014. They have jumped to $22 billion over the past five years.

In the industrial category, what Colony is selling, portfolio purchases totaled about $12 billion from 2010-2014. There has been more than $61 billion in such deals in the past five years.

In healthcare properties, another legacy category for Colony, portfolio sales have decreased over the two periods. 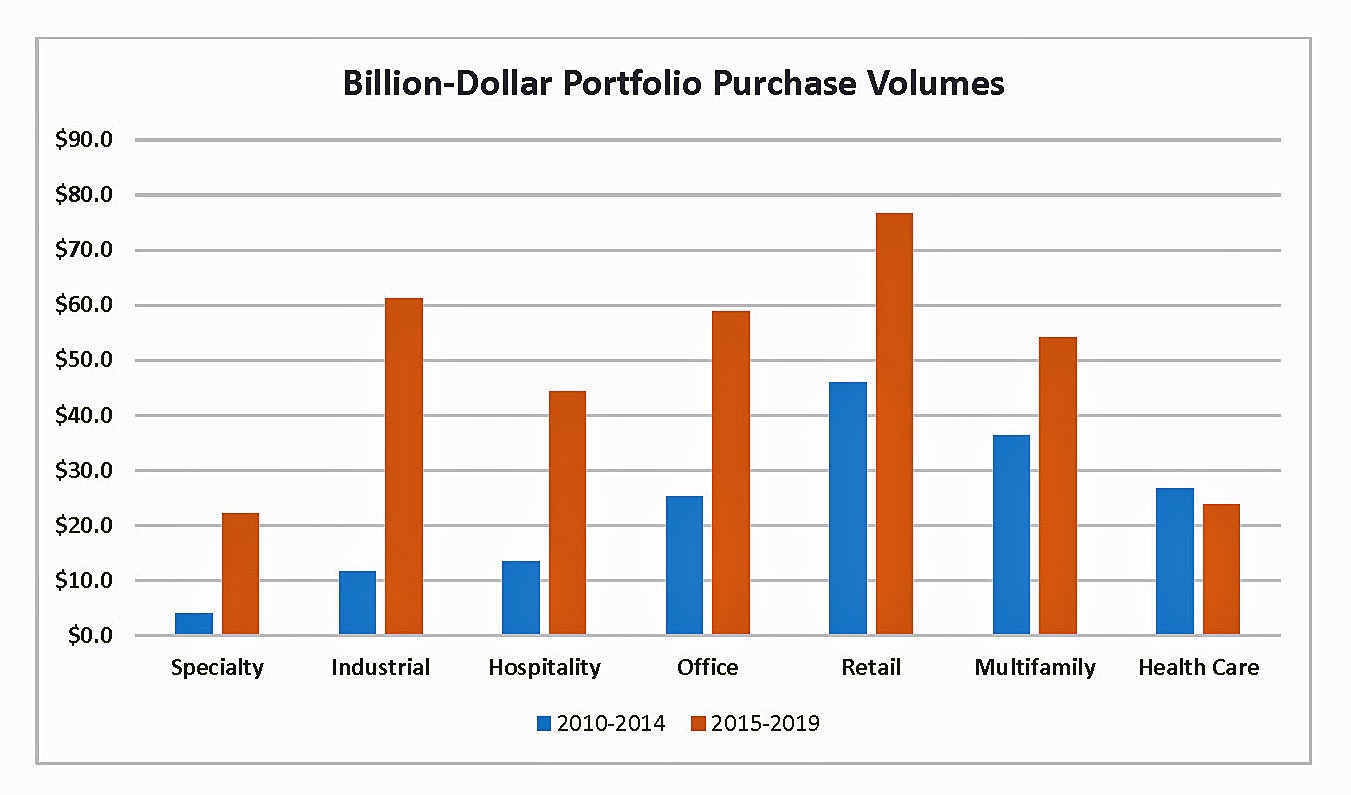 Get in the Zone: Opportunity Funds See Boost As Investment Deadline Looms

Qualified federal opportunity zone funds are on track for one of their largest monthly fundraising hauls in 2019 as a year-end deadline looms.

Funds are on a pace to raise more than $450 million this month. If they reach that bar, it would be the largest amount raised since May, the month following the Department of Treasury release of guidelines clarifying how those funds work.

Launched at the start of last year, the federal opportunity zone initiative provides tax breaks to investors who transfer recently realized capital gains into qualified investment funds. These funds must then invest that capital in projects and businesses within more than 8,700 designated zones with the goal of boosting jobs and housing.

The federal government estimated the program would pump up to $100 billion into the zones. That hasn't happened yet, and many blame lack of clarity over the rules governing the program. So far this year, though, funds investing in commercial real estate that have registered with the Securities and Exchange Commission have reported raising $2.82 billion, according to CoStar data. See who has reported this year.

Still the boost in fundraising this month shows that investors know they could lose out on the full benefits of the plan, Wieder noted.

"Although losing the 5% deduction by investing after 2019 is a lost benefit, the greatest benefit and the benefit that most qualified opportunity investors are looking forward to is holding the investment for over 10 years and paying no tax on the gain derived from the opportunity zone investment," Wieder said. 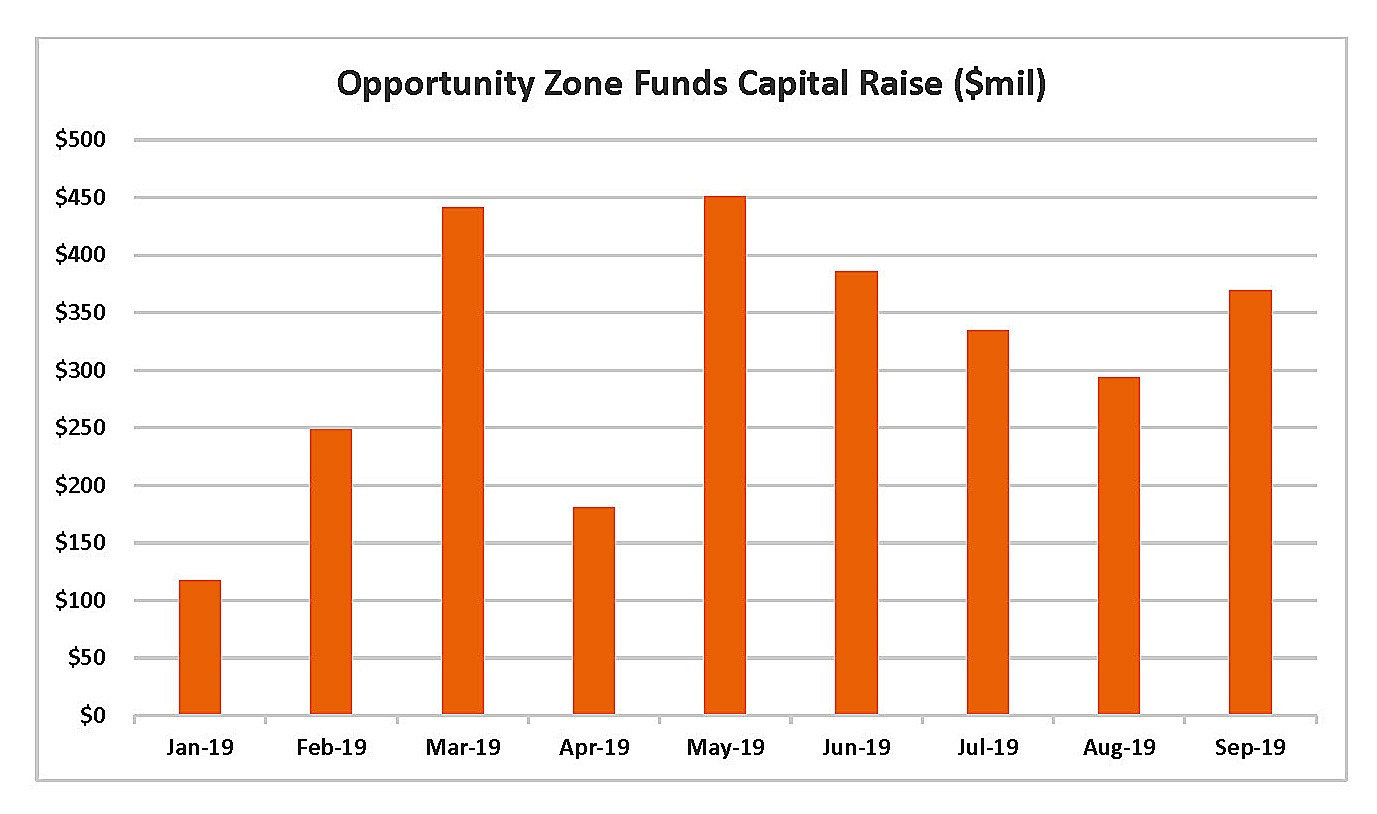 Store It Away: The Best and Worst Property Types for Income Growth

The growth in annual net operating incomes of properties backed by securitized loans has slowed now for a second straight year to an average of 1.9%, but they are falling unevenly. For income growth right now, self-storage facilities could be the best place to put money.

The NOI growth rate for self-storage properties has been decelerating but continues to lead the other property types. After several years of supply growth, downward pressure on rents is evident, having fallen from 5.2% in 2017 and roughly 10% in each of 2016 and 2015. However, Fitch analysts noted that most of the higher levels of supply have already delivered, so expect NOI growth to remain positive for a while.

At the opposite end, Fitch data shows NOI falling 0.2% for hotel properties. While the average decline tempered from a 0.5% decline in 2017, Fitch expects hotel NOI on average to continue to stagnate or fall. Fitch considers hotel performance to have peaked with gains from revenue growth increasingly being offset by rising labor costs and real estate taxes.

Even among hotels though, there was great variation in NOI growth: the Fitch’s Far West region shows a growth of 3.5% while all other regions are down or flat.

Friend or Foe? Feds to Scrutinize Wider Array of Deals With Foreign Firms

Getting a real estate deal through with foreign investors looks to be getting substantially more complicated. The Treasury Department has proposed new rules giving the federal government the right to review a bigger bucket of such deals.

Under the new proposals, restrictions are widened on where deals can be made and with whom.

The new proposals from Treasury come as part of its plan to implement the Foreign Investment Risk Review Modernization Act of 2018. The law gives Treasury's Committee on Foreign Investment in the United States the right to review and approve or disapprove deals.

Historically, CFIUS has had jurisdiction over real estate transactions only where the transaction could result in control by a foreign person over an entity engaged in interstate commerce in the United States. Now, even deals involving U.S. subsidiaries of foreigners could come under CFIUS jurisdiction.

The Department of Defense has long been concerned with foreigners getting so close to American military or national security bases that they could physically or electronically spy on their activities or transmissions.

The proposed regulations cover deals within one mile of more than 100 identified military installations; within 100 miles of another 32; in any county near Air Force bases in Colorado, Montana, Nebraska, North Dakota and Wyoming; or within 12 nautical miles of the U.S. coast.

In addition, previous CFIUS jurisdiction was limited to real estate purchases. The new proposals now includes leases or any deals that give foreign entities at least three of any four of the following rights: to physically access a property; to be able to exclude access to others; to improve or develop the property; or to affix any structures or objects to the property, according to attorneys at Winston & Strawn.

Some deals, such as single-family home purchases, are exempt from the review. However, even some of the exemptions come with caveats. For example, leases in multitenant office properties are exempt – so long as the foreign tenant does not take more than 10% of the building space.

Not sure your deal or property falls in those targets? Treasury said it would develop an online app to figure it out.

Treasury is taking comments on the proposals through Oct. 17, with final changes to be implemented by Feb. 13. Notably, Treasury said the new rules will not be retroactive. Deals done before the February enactment would not be subject to tighter scrutiny.